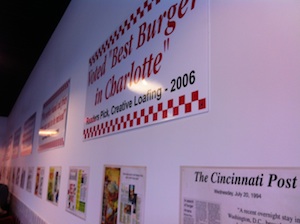 My daughter and I had a burger craving, so we went to 5 Guys Burgers and Fries. If you have ever visited a franchise of the DC-based burger shops, you know that they have had some good press through the years, and are not afraid to let you know about it.

Every window and wall, including the restroom hallway, is dedicated to reminding you of how good their burgers are. Zagat ratings, newspaper quotes and foodie reviews occupy spaces that would, in any other quick service food chain, be used to advertise kids meal toys, burger specials or local nick-knack.

It would be easy to be cynical of a company that makes sure you know how good everyone thinks they are… if the burgers fell short of the hype. But they don’t. Which begets an important question.

Is the burger good because of the taste, with the decor merely a celebration of that savory success? Or is the taste of the burger buoyed by the constant visual reminders of how loved they are, as a sort of self-fulfilling prophecy?

Whether you believe 5 Guys is celebrating success or living a self-fulfilling prophecy, there is something to be learned from their marketing.

As church leaders, we have been called to the most important mission of making disciples. Our “product” has eternal impact and daily importance in the lives of people, yet we tend to shy away from making too big a deal when the mission is accomplished. But, most often, churches do not celebrate success because they have not identified and shared an articulation of what a win looks like.

What if the local church took a cue from 5 Guys, and began to make a bigger deal of being good at what we do?

What if we were more overt with the great things going on as Christ is made known and God is glorified in the lives of people?

As far fetched, and borderline sacrilege as the idea may be, here are 3 certainties if the church marketed like 5 Guys Burgers and Fries:

Your church may not be called to plaster its walls with press clippings and favorable emails. However, every church can do a better job of celebrating success, creating environments that foster life change, and painting the picture of the mission accomplished.

What is one visible way your church will better define and celebrate disciple-making success in 2013?